Accumulating the souls of evil-doers was boresome. By the time they arrived in Hell, they were haggard, broken, their nefarious ways lost with their humanity. The infinite number of vanquished souls, shrieking throughout eternity, begging him for mercy, could no longer placate Lucifer’s restless spirit. They were barely husks, depleted by an afterlife of torture. While their misery was satisfying, it was not stimulating. No, they could not engage him like he could the living.

Mankind lined up to serve The Dark Lord, lazy individuals seeking a shortcut to notoriety. Together, he and his entourage amassed an empire, fame born of envy, desire, and relentless promotion. Their exploits were renown. Beautiful people threw exclusive affairs, parties where alcohol flowed like blood, dark rooms behind closed doors echoed with the sounds of lust, and lucrative handshakes bound the souls of men to the service of Satan. The media clamored over vapid stories of privilege and glitz.

Their willingness to sacrifice eternity for a photo with him on the cover of a magazine left The Devil incensed. It was too easy. Society was no more challenging than the phantom remnants of The Damned. His efforts were not wasted, however. His proximity to immorality and relationships with the depraved certainly made it easier to identify and gather wicked souls.

Frankenguitar should not have survived that fall. His neck was hopelessly broken. He was dead, gone. His dismembered head dangled by only slackened strings. Dark magic and wood glue revived Frankenguitar, but his injuries left him disfigured. He became a recluse, seeking solace somewhere deep in a Michigan forest. The locals there say, if you burn a campfire late enough, Frankenguitar will serenade you in the dark.

Nick knew she wasn’t coming after 20 minutes, but still waited a full hour. What choice did he have? He endured the hassle of driving into the city. His 2 hour journey took closer to 3 hours. Some simpleton on a cell phone stepped into oncoming traffic just blocks away from his destination. Emergency personnel had to detour traffic around the entire area while they dealt with the carnage. That slight deviation from his printed directions was enough to have him driving aimlessly lost for an hour. He was thankful he had the foresight to leave the house early. Otherwise, he might have kept her waiting.

Funny how things can change in 60 minutes. She made a complete fool of him. It was Emma who had insisted that they meet in person. He was still completely content with their relationship exactly the way it was. It was thrilling to hear the laptop ring out with the sound of a new message. The online conversations that ensued could go on for hours. She had a such a beautiful way with words. She made him laugh too. Why did she have to mess with perfection?

He paid for the coffee he consumed while he pathetically waited, then exited the cafe. The dark clouds that loomed overhead let out a roar and spilled their contents. Mammoth drops of rain soaked him as he sprinted for his car. At least the accident scene was clear. He could get the hell out of there unimpeded.

Soggy and pissed, Nick made his way home. He didn’t even bother to change before he sat in front of his computer and fired off a message to Emma.

“I waited for an hour, then got stuck in the rain, Emma. You could have called.”

He waited, refreshing his screen every few seconds, becoming more despondent each time his effort proved fruitless. Dispirited, Nick logged off and dragged himself upstairs to shower and change. It was morning before he had the nerve to check his messages again. Still nothing.

“Did you drag me to the city just to break it off? What happened? Decide it was easier to just stop talking to me entirely?”

All day Nick tried, in vain, to forget about being so unceremoniously dismissed. However, he required closure. Out of desperation, he attempted one last message.

“I didn’t know you had the capacity to be so cruel, Emma. I love you, truly and deeply. I was going to tell you at the cafe. I honestly believed that you felt the same. If that has changed, please, I’m begging you, just tell me.”

He fell asleep at his keyboard that night, waiting for Emma to admit she’d made a mistake and confess that she loved him too.

During the 2 days that followed, Nick’s heartache became anger. He was convinced that she intended to end their relationship that day in the city but got cold feet and blew him off instead. By the 3rd day, when a message from Emma finally did arrive, he was too furious to acknowledge it.

Nick selected the message, held down the Shift key, and pressed Delete. He had his closure. He got to give sweet Emma a dose of her own medicine.

“Dearest Nick, You don’t know me, but I’ve just recently learned that you do know my sister. Unfortunately I have terrible news. I am sorry to tell you this way. Emma was struck by a vehicle last week and was killed in the accident. I am so sorry that you were not contacted sooner, but the police kept her phone for their investigation. According to them, she was drafting the following message to you when the accident occurred,

‘I am so excited to see you, touch you, hold you, kiss you. I want to look you in the eyes when I tell you how I feel. I’m almost to the cafe already, I think I’m over an hour early. I’m that eager to begin our next chapter, my darling. Hurry and get here Nick, I…’

The lights of an oncoming truck slammed against the windshield with blinding force. Todd Gibson was instantly robbed of his vision. Being unable to see the winding road ahead of him, Todd fought to keep the tires on the pavement. The unfamiliar turns and rocky terrain were too much. In a moment of panic he grasped his sleeping bride by her arm, “Jen!” Jennifer woke with a start as their car plummeted down a steep, rocky ravine. In an instant, it was over. 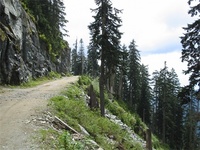 Despairingly, Jennifer turned toward her new husband. She knew immediately that his life had fled him. “No!” she choked, “No Todd, it’s not fair…” she heard her own voice fade into merely a whisper. It had only been a few hours since Jennifer and Todd’s honeymoon began. Struggling to remain conscious, her mind wandered to the beautiful day prior. The day Jennifer and Todd had taken their vows and become man and wife. Now, “until death do us part”, had in reality, been only a matter of moments. She thought back just a few hours earlier as they were to begin their trip to the mountains. Todd opened the door to their SUV for her and lightheartedly said, “Mrs. Gibson, your chariot awaits”. 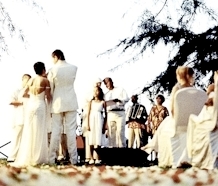 With all of the energy she could gather, Jennifer reached out and feebly grasped Todd’s hand. She tried to find some sense in what had just happened, but her mind was becoming unclear, and an eerie darkness closed in around her…

Jennifer found herself alone in a strange, ominous world. Ahead of her was only more of the same cold blackness, but from behind her, Jennifer felt a comforting warmth. She turned toward the source of the heat to see a brilliant blue light. Inside of this majestic glow was the hazy shadow of a man. She was sure it was God. Knowing she would find comfort and safety with Him, Jennifer started toward the silhouette. The shadow became clearer as she drew closer. The figure offered his hand as if to beckon her, guide her to him. However, from deep within the darkness, Jennifer began to hear voices…

They were mere whispers at first, but gradually they grew stronger. She recognized these voices. They were those of family, friends, her loved ones. Again she turned toward the inviting light; the shadowy figure grew closer still. As she turned back once more to the haunting darkness, the voices of her loved ones were unmistakable. Jennifer longed desperately to run to them, to mourn her loss with them, to let them comfort her. Still something in the light held her there. Finally, as she stared once more into the welcoming illumination, she knew what it was. The shadowy figure wasn’t God; it was her husband. It was Todd. Jennifer realized now that there was life in the darkness and death in the light.

Instantaneously the light dimmed, and the voices faded. It was time for Jennifer to make a choice or risk being trapped in this dark abyss for an eternity. She wanted so terribly to be with her loved ones, but losing Todd forever was more than she could bear.